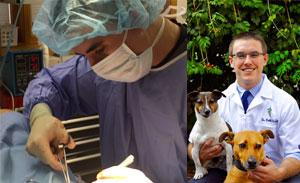 Cleo is a 6 year old female spayed Border Collie mix who presented to us on March 30, 2018. Cleo’s owners reported that she had been completely normal until that morning. They noticed that she went outside 5-6 times in the morning, which is unusual for her. When she came back inside she vomited a very large amount. Cleo’s owners became concerned and started closely monitoring her over the course of the morning. They noticed that when she was going outside she was squatting, but nothing was coming out. She was more lethargic than usual, and when she vomited for a second time, they decided it would be best to have her examined by a vet.

On presentation Cleo was bright, alert and responsive. She also had a normal temperature; however, her gums were very tacky (sticky) and her skin had a decreased turgor (her skin didn’t retract normally when gently pulled). These are common indicators of dehydration. Moreover, Cleo was painful when her abdomen was palpated and she resisted deep palpation of her bladder. After discussing the findings with her owner, we became concerned that Cleo may have something going on internally that would

explain her clinical signs and physical exam findings. We recommended starting with x-rays of her abdomen and her owners consented. On Cleo’s x-rays we immediately noticed that she had abnormal opacities (think white bubbles) within her urinary bladder that were consistent with bladder stones. Please see the picture below for clarification that shows the urinary bladder with blue arrows and the stones with red arrows: 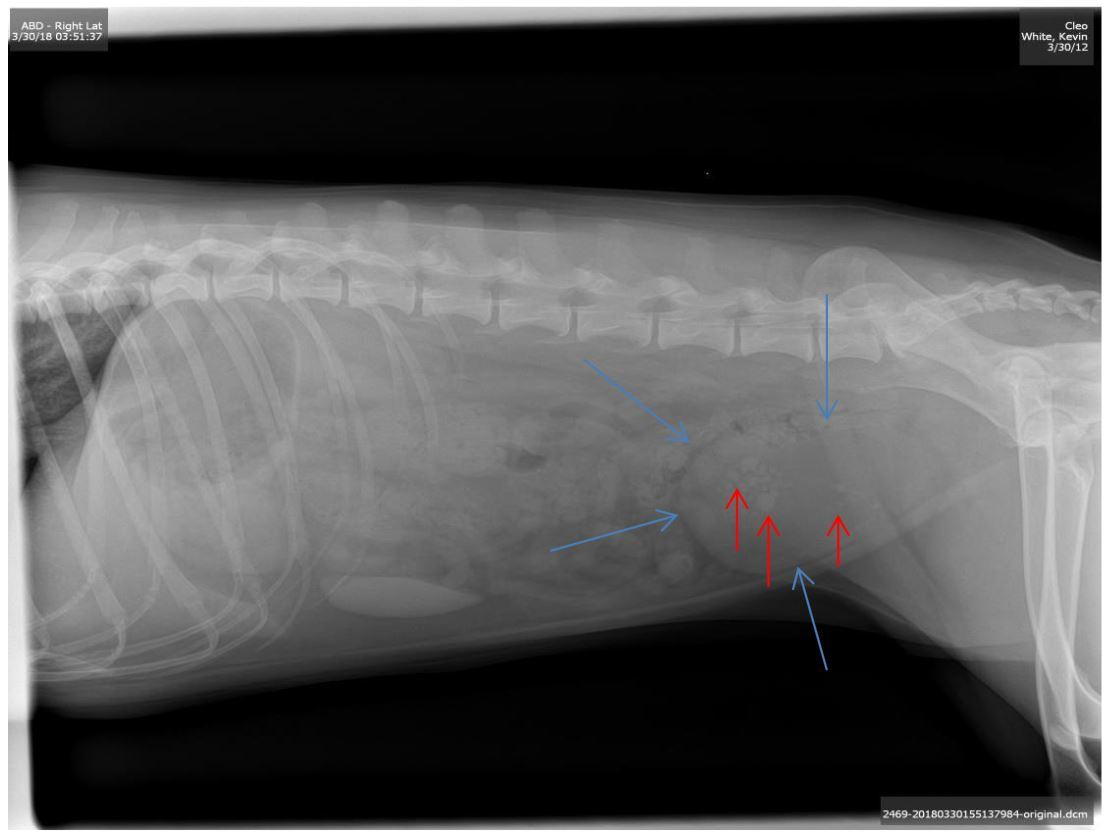 After we discovered the bladder stones, we revisited the other half of our original problem, which was ‘why was Cleo vomiting?’ Dogs and cats can have bladder stones and not show any clinical signs, but occasionally they can cause issues like blood in the urine, straining to urinate, or in the worst case, a urinary blockage, which is a medical emergency. Because Cleo was vomiting and had been observed straining in the backyard, we became concerned that she may be developing, or already have, a urinary blockage. It is very uncommon for female dogs and cats to block because females have a wider and stretchier urethra than males; however, the largest stone in Cleo’s bladder appeared big enough to potentially cause a blockage. As a result we investigated Cleo’s kidney values by performing baseline labwork and a urinalysis. Because Cleo was so sick we performed these tests in our clinic to get an immediate answer. Unfortunately, Cleo had an elevation in 2 kidney values, an elevated white blood cell count and had an abnormal amount of white blood cells, red blood cells and bacteria in her urine. We therefore sent out her urine for a culture and susceptibility to determine what bacteria were responsible for the infection and what antibiotics they would be sensitive to. With Cleo’s labwork findings we became concerned about two distinct possibilities: (1) Cleo had transiently blocked during the morning at home and had passed a stone outside thereby causing her kidney values to be elevated or (2) she had a severe urinary tract infection that had ascended up into her kidneys causing the elevated kidney values. Regardless of those two possibilities, Cleo required 3 main treatment goals: (1) rehydration and increase perfusion (blood flow) to her kidneys with fluids, (2) antibiotic therapy to treat the infection, and (3) removal of the bladder stones.

As a result of Cleo’s elevated kidney values we felt it was best to start her on intravenous (IV) fluids and IV antibiotics as soon as possible. She was immediately admitted the hospital, an IV catheter was placed and IV fluids and IV antibiotics were started. We felt that with a few hours of hospitalization that afternoon and the following morning Cleo would be better hydrated and stabilized for surgery. The following day we performed a cystotomy (bladder surgery) on Cleo to remove her bladder stones. The

procedure took approximately 1 hour and we successfully removed around 30 stones of different sizes with the largest approximating about one-third of a golf ball! We continued to hospitalize Cleo with IV fluids and rechecked her kidney values prior to discharge. Fortunately, they had improved and come down into the normal range! Her white blood cell count had decreased as well! Cleo’s urine culture came back a couple of days later, and showed a staphylococcus (staph) infection that was resistant to the most common antibiotics. Fortunately, the bacteria were susceptible to one of the two antibiotics that we had chosen and should hopefully clear up the infection.

We wanted to share this case for a couple of reasons. First, we wanted to highlight the high frequency that we see bladder stone cases. Both dogs and cats can get bladder stones for a number of reasons. Those reasons generally include diet, genetics, urinary tract infections and hard water sources. They can be managed and prevented with special prescription diets in the long-term that help adjust the urine pH and urine concentration as to help create unfavorable conditions for stone formation. Second, we wanted to stress the importance of performing bacterial cultures and susceptibility testing. Nowadays, with increased antibiotic usage and resistance we often see infections that are resistant to older and even newer antibiotics. As a result it becomes increasingly important to make early identification of these bugs before the infection has progressed. Lastly, we wanted to celebrate Cleo’s success and share her heartwarming story to help raise awareness of owner attentiveness to their pet’s symptoms. Because dogs’ and cats’ naturally instinct are to hide pain and symptoms, it is important for owners to be very diligent about observing and reporting clinical signs to their veterinarians. Had Cleo’s owners not recognized she was this sick and waited even 12-16 hours she may not have had such a successful outcome.

Thank you for taking the time to read Cleo’s story!