What's Wrong With Wiggles? The ex"SPLEEN"ation!

Wiggles is an 11.5 year old male neutered Australian Shepherd mix who presented to our hospital on March 27, 2018. Wiggles’ owner reported to us that he just didn’t seem quite himself over the last 5-7 days. He had skipped breakfast a couple of times and was lethargic occasionally as well. He also seemed to be panting more often during that time. However, he still had normal periods of being himself and overall was doing quite well for an old-timer. He has otherwise been a healthy dog with no major medical issues aside from having multiple lipomas (benign fatty tumors).

On presentation Wiggles was bright, alert and responsive. He had a mildly elevated temperature (102.9F; normal is 100-102.5) and was well hydrated. We also did not detect any evidence of a heart murmur or abnormal lung sounds. However, when palpating Wiggles’ abdomen he was very tense and resistant to any pressure applied. He didn’t yelp out in pain, but his reluctance to relax his abdominal muscles during our exam made us concerned that he may, in fact, be painful. Moreover, by tensing his abdomen we were unable to fully appreciate his abdominal organs and, as a result, we became concerned that there may be an abnormality.

After talking with Wiggles’ owner we felt it was best to take an abdominal x-ray to determine if there were any obvious abnormalities that could help explain his clinical signs and physical exam findings. Unfortunately, on his x-ray we found that Wiggles had a mass effect in his abdomen near his spleen. A “mass effect” is a general term we used to describe an x-ray finding when there is something in the abdomen (or elsewhere) that is displacing organs into locations that they normally should not be. See the below picture with the blue arrows depicting the large abdominal mass and the red arrows depicting the intestines abnormally pushed upwards. 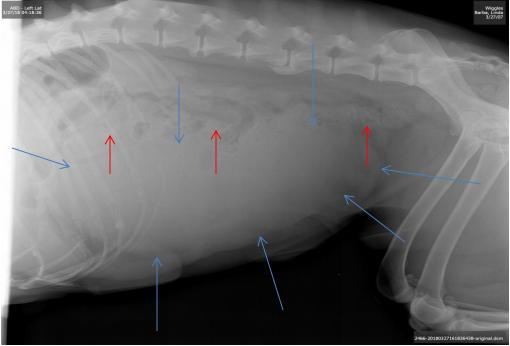 With Wiggles’ age we became very concerned about the possibility of cancer. Older dogs can develop cancerous tumors in their abdomen that can unfortunately be terminal. So we decided to take x-rays of Wiggles’ chest to screen for possible metastases (cancer spreading). Wiggles’ chest looked clear; however, there were a couple of nodules that we could not rule out as metastases so we sent the x-rays out to a radiologist for a 2nd opinion. Luckily the radiologist did not believe the nodules to be metastatic disease; instead, it was believed that they represented normal age-related changes that can happen in healthy dogs. Please see the below x-ray for the concerning areas that were deemed ‘normal’ for an older dog (shown with red arrows): 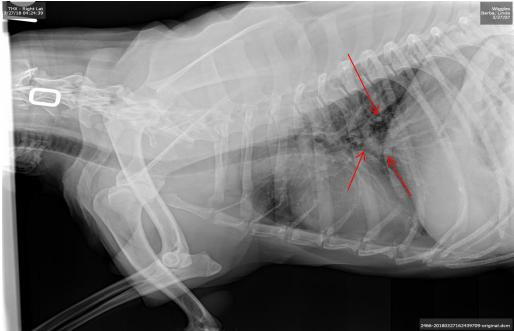 After performing chest and abdominal x-rays, we then performed an ultrasound of Wiggles’ abdomen to characterize the tumor we were observing on the x-ray and to also finish screening for possible metastases to other organs. Fortunately, on the ultrasound the tumor appeared to be confined to the spleen and there was no evidence of spreading to his liver or intestinal lymph nodes.

After completing the cancer screen, we talked extensively about pursuing exploratory abdominal surgery on Wiggles. This was a very big decision because of his age and also because of what we might find during surgery. Unfortunately, ultrasound and x-ray are never perfect in their results and we had to be prepared—that despite the negative screen—we may find evidence of metastatic disease during surgery.

Wiggles’ last hoop to jump through prior to surgery was to have baseline labwork and a coagulation test performed. This is done to ensure that Wiggles is able to clot during surgery and to screen for any other abnormalities that may have precluded him from surgery (i.e. like severe kidney disease or a low total protein level). Unfortunately, severe kidney disease can be worsened with anesthesia and a low total protein may prevent adequate healing post-operatively. Fortunately, Wiggles’ coagulation panel was normal and his labwork showed that he had a mildly high white blood cell count. It was deemed that this was likely secondary to severe inflammation from the very large splenic tumor. A bacterial infection could not be ruled out so Wiggles’ was started on IV antibiotics prior to the surgery.

After a negative cancer screen and no major abnormalities on Wiggles’ labwork, we felt that he was a good candidate for surgery. We proceeded with an exploratory abdominal surgery on April 2, 2018 with the intent of removing the spleen and the tumor associated with it. We also planned on scanning the remaining organs in the abdomen for possible cancer and also planned to perform a gastropexy. A gastropexy is a surgical procedure that uses suture to tie the stomach to the body wall. This is done to prevent rotation of the stomach (a surgical emergency) at a later date. Dogs that have their spleens removed can sometimes be at a higher risk of their stomach rotating after surgery. Wiggles’ surgery required 2 veterinarians and it took a little over 3 hours. Fortunately, the tumor and spleen were successfully removed and the gastropexy performed without any major complications. The tumor weighed a little over 6lbs, which is a record for Carol Stream Animal Hospital! The tumor was sent to the laboratory to be sampled to determine if it was malignant or not. Fortunately, the tumor was considered benign and Wiggles made a full recovery!

We wanted to share this case for a number of reasons. First, we wanted our clients to know the process we go through prior to major surgery. Unfortunately, in some cases surgery may not be in an older dog’s best interest if there is significant concurrent disease or if metastatic cancer is discovered. However, it is also important to know that age doesn’t automatically preclude a dog from surgery. Age is not a disease. As long as they are closely monitored under anesthesia and appropriate anesthetic drugs are chosen, older dogs can do quite well. Secondly, we wanted to stress the importance of recognizing when our pets our sick. Wiggles only showed vague, non-specific clinical signs prior to his diagnosis. Due to him having a very high pain tolerance, he hid his clinical signs from us and his owner, which made a diagnosis more difficult. It is very important when older dogs are behaving differently, to not automatically attribute those clinical signs to old age. Sometimes they can be very subtle signals that something may wrong. This is the reason why sometimes we rely on objective tests like labwork and imaging instead of just symptoms and a thorough physical exam. Lastly, we wanted to highlight Wiggles’ success and share his heartwarming story to help raise awareness about the importance of senior health and to show that senior dogs are capable of inspiring resilience. Thanks for taking the time to read Wiggles’ story!